The first half of the programme was devoted to sacred works by Mozart. First came his little known short Mass in C, K259. After an uncertain start we heard a creditable account of this attractive work. The four soloists were drawn from the choir. The soprano, Becky Quiney is a former pupil at Wells Cathedral School and is now in her first year at Bristol University. In her first solo she appeared understandably nervous but gained in confidence as the evening progressed. The male alto, Jonathan Woodhouse, tenor, Edward Coton, and baritone, Andrew Mahon are Wells Cathedral choristers and they made a solid contribution to the performance. 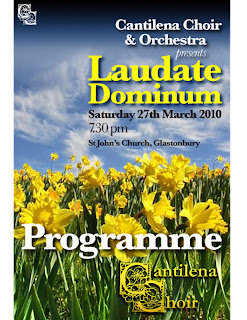 The “Laudate Dominum” from the Solemn Vespers, K339 which followed flowed easefully with the soprano getting into her lyrical stride. The discrete organ accompanist was Jonathan Vaughn.

The “Ave Verum”, K618, probably Mozart’s most popular sacred piece, moved along gracefully and without sentimentality. Perhaps a touch of rubato here and there might not have been amiss.

The Te Deum, K341 ended the first half with a flourish. The final fugue was brought off with clarity and vigour.

The main work of the evening was Gabriel Faure’s well-loved Requiem. This was delivered with warmth and sensitivity. Despite a momentary loss of pitch in the “Sanctus” there were many ravishing moments throughout the work. Although the “Pie Jesu” movement is frequently assigned to a boy treble the composer had a preference for a soprano. He would certainly have not been disappointed by Becky Quiney’s lovely rendering which displayed apt simplicity. For your reviewer the high point of the evening was the “Libera Me” with its baritone solo, performed to perfection by Andrew Mahon. His expressive legato and dramatic sensitivity were most impressive. The haunting “In Paradisum” brought the evening to a serene close. The small orchestra, led by Tony Bevan, gave firm support in this work and produced some really warm tone from the strings.

Throughout the evening the choir performed with conviction. In spite of their lack of numbers the male sections held their own, especially the tenors. Oliver Walker conducted with clarity and musicality. He is to leave the area later in the year and the choir will be sorry to lose him.

Posted by Glastonbury Cantilena at 08:32 No comments: