Our 2014 summer concert is devoted to the decade which includes the First World War. Apart from "In Flanders Fields" none of the pieces we are performing are directly related to the war. But nearly all of them encapsulate a feeling that something is coming to an end and that we are poised on the brink of something new and maybe terrible.

For example. Elgar's setting of Guido Cavalcanti's "Go Song of Mine!" describes in chromatic passages that are both despairing and ecstatic the need for man's hard heart to be broken before he can achieve salvation. In "Serenade" the contrast between dreams of life and liberty and the sadness of reality is expressed

Stanford's "Haven" shows us a shore of such desolate greyness that we can feel the chill.

The concert includes "rest" an early Vaughan Williams setting of a poem by Christina Rossetti in which the poet longs for death as a release from all earthly sensations. 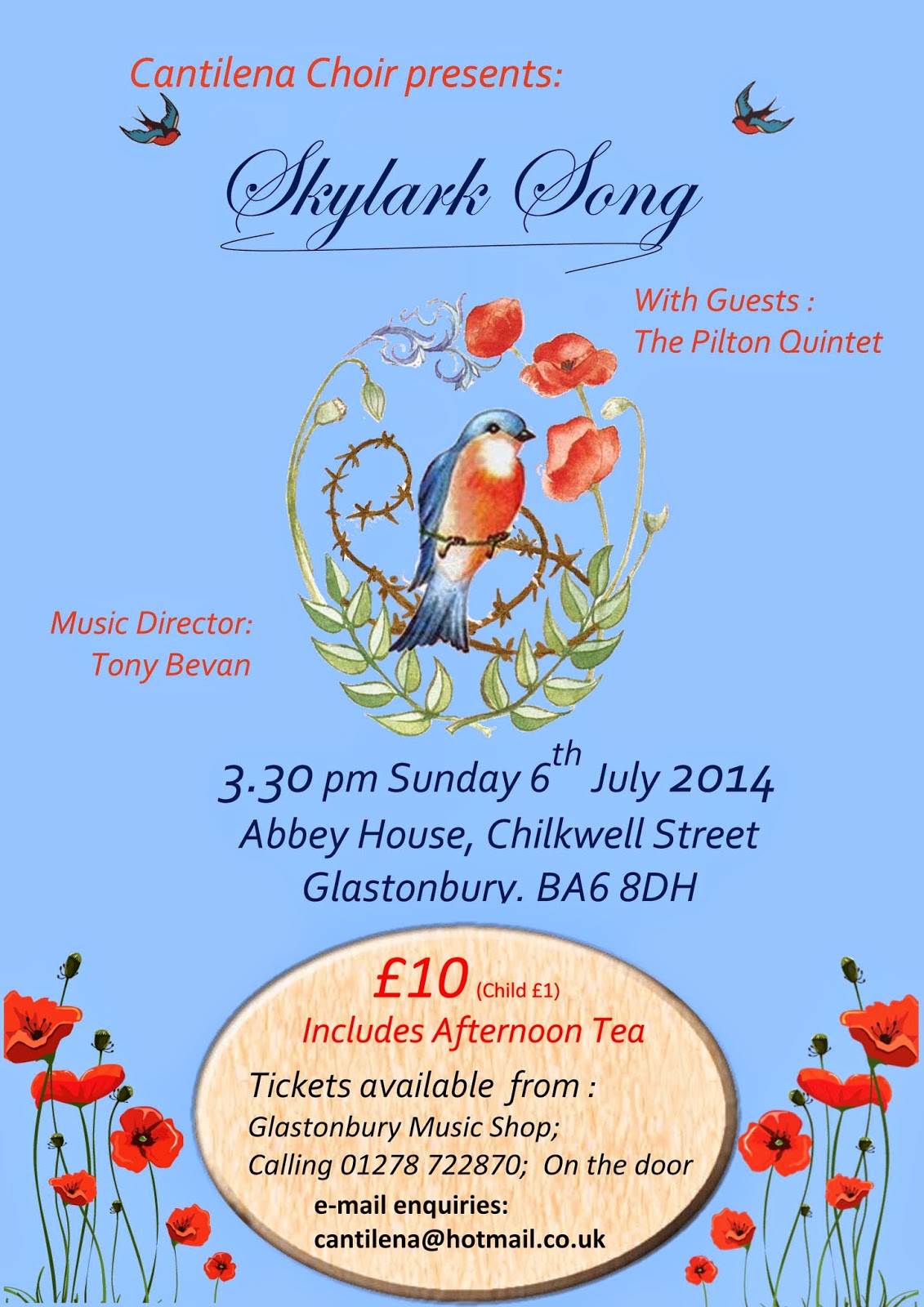 This is not to say that the concert is gloomy! Far from it - the songs are all beautiful and melodic and Stanford's "Blue Bird" shows the skies clearing as the bird of joy flies above. But there's a real nostalgia for earlier, uncomplicated times.

Let's leave the last word to Finzi with his setting of Robert Bridges' "Clear and Gentle Stream":

"Clear and gentle stream!
Known and loved so long,
That hast heard the song
And the idle dream
Of my boyish day;"

Who doesn't look back to a time when emotions were simple and the shining future beckoned?

Come and enjoy this evocation of a lost time which includes the essentially English nostalgic occasion - a cream tea
Posted by Glastonbury Cantilena at 01:49 No comments:


We are, as was explained in our last blog, excited to be performing "In Flanders Fields" set by Andrew Bunbury as part of our Summer 2014 concert.

This will be the UK premier of the work, the world premier having been in Amiens Cathedral in October 2013. So how did we discover this work and decide that it was especially suitable for us?

Andrew composed the piece as part of a larger work,  Waffenfreunde (Friends in Arms)which includes a setting in German of  Edward Lichtenstein's poem Abschied as a recognition of the equal suffering of the German troops. (This will have its world premier performance on Saturday  12th July by the South West London Choral Society at St Anne's Church Wandsworth under the direction of Martin Everett.) It underwent some revisions in the light of world events and what Andrew knew about his own family's involvement in WW1

Andrew has a strong Glastonbury connection; his father taught at Millfield School, and was churchwarden at St Benedict's Church. Andrew was educated in Glastonbury and had his first experience of choral singing in St Benedict's.

It is especially fitting, therefore, that the first place in England that this work is performed will be Glastonbury.

So, welcome home, Andrew; we will do you proud.

A reminder about the details:

Posted by Glastonbury Cantilena at 01:33 No comments: