November has been a busy month for Cantilena. 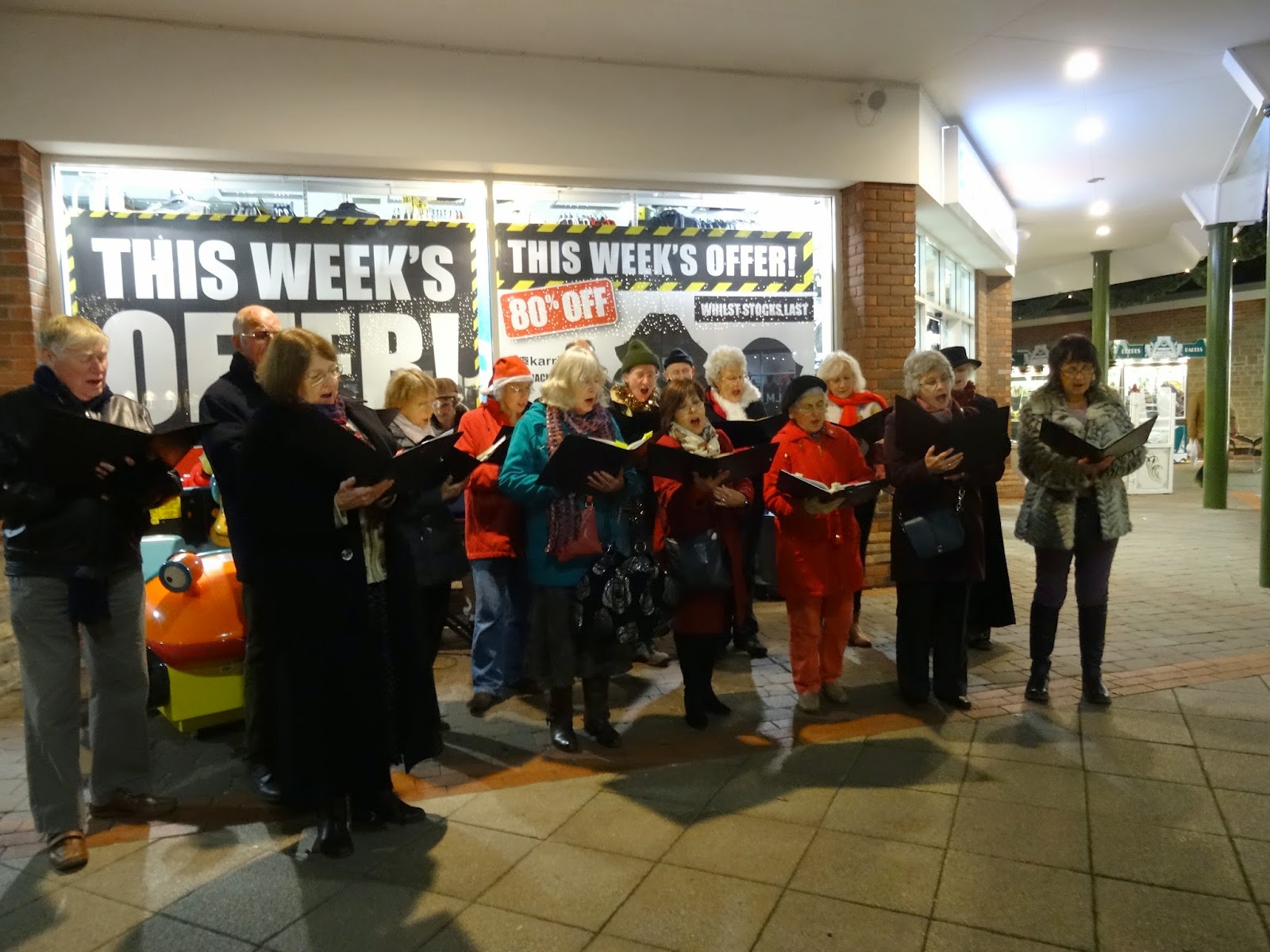 On Thursday 20 November we sang in the switching on of the Christmas lights at Clark's Village. We were hosted by Heart FM. who had set up a bandstand in the centre. Their banter may have been a bit unexpected, but the crowd of shoppers seemed to like it. I would have liked to hear more singing from them, though!.

But we gave a good account of ourselves and later sang at various locations around the village, to the delight of several small children!

It was more tiring than we expected but has hopefully increased our standing locally, as well as giving us an opportunity to sing carols, which should never be missed!

We shall be doing this again on 11 December for their "Narnia Wonderland" late night shopping event.

If you are planning some Christmas shopping at Clark's Village anyway, why not combine it with coming to hear us sing the old favourites! Even joining in if you fancy it!

Posted by Glastonbury Cantilena at 03:27 No comments:

The final pieces that make up our autumn concert are two motets by the Austrian composer Anton Bruckner. Bruckner is mostly renowned for his grand, expressive symphonies but he wrote a number of pieces for unaccompanied voices.

In our concert on 22 November we are singing "Christus Factus Est" a passionate piece describing Christ's sacrifice for our sakes. The piece soars up and down and uses a wide dynamic range to express the words. 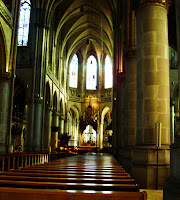 Bruckner wrote the second motet, "Locus Iste" for the dedication of the new Linz Cathedral in 1869. The words mean "This place was created by God". The soaring lines reflect the neo-gothic arches and pillars of the cathedral, while the beginning and end convery reverence and awe.

I had the priviledge, a few years ago, of singing this work in Linz Cathedral which was rather special.

Come and hear us:

Posted by Glastonbury Cantilena at 01:58 No comments:

One of the special things about Cantilena is the wealth of local talent that's available for us to use as soloists and accompanists.

We often perform unusual works that give young performers opportunities to widen their repertoire. Standards are high and so we all benefit.

This term is no exception; in fact we are benefitting from three home-grown soloists.

Accompanying us on the organ throughout the concert is Ashley Marshfield. Ashley is presently music director at St Thomas's Church in Wells. Find out more about him on his Twitter page:https://twitter.com/AMarshfield

The works we are performing require two soloists: Baritone and Soprano.

Rob Clark, baritone, is no stranger to Cantilena, having sung with us in 2013. He told me that his early musical love was the trumpet but, after he successfully auditioned to play the lead role in a college production of "Grease", for which he felt he should have a few singing lessons, he turned his talents to singing! He hasn't developed  a career in musical theatre, but has sung with Harry Christophers early music group The Sixteen.

It is a special pleasure to welcome Helen Ostafew, soprano. Her parents, Jan and Nick, used to be valuable members of Cantilena for many years before their removal to Dorset. Helen studied classical singing at The University of Leeds during which she spent a year at Enschede. She is very active in many ways, singing solo in many concerts, directing two choirs, writing music for performance and also developing her jazz singing skills.

Welcome to all these wonderful performers - come along and support them!

Posted by Glastonbury Cantilena at 08:04 No comments:

All the Way from America

Which may seem a strange title when I am going to talk about a work by the great Bohemian composer Anton Dvorak. 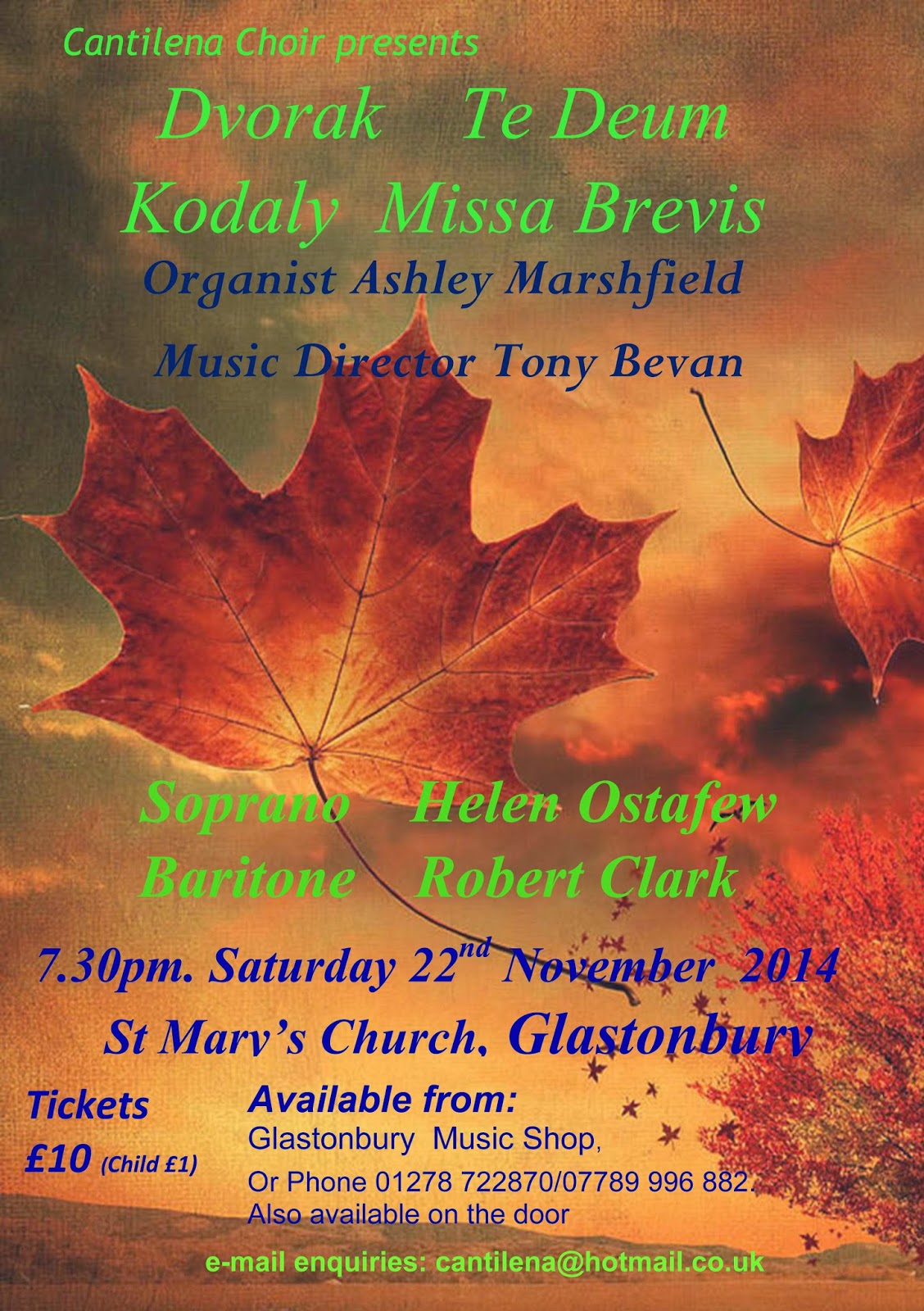 But it's true. Dvorak went to America in 1892. He was asked, in advance of his visit, to write a piece to celebrate the 400th anniversary of Columbus's discovery of America.

He was promised a suitably celebratory text. but none was forthcoming. In desperation he turned to the text of the Te Deum. He felt that it was joyous enough for the occasion and it also appealed to his own religious convictions. In the event it was not performed at the celebrations, but two weeks later with a choir of 250 singers.

Cantilena has 25 singers but feel sure that we can do this work justice. It is a happy work, full of complex rhythms and unusual harmonies.

This concert promises to be unusual.

Don't miss it!
Posted by Glastonbury Cantilena at 08:38 No comments: