Handel Gets There First

In the world of Music the name "Passion" has become synonymous with J S Bach. as though there was no such thing until he wrote his famous works.

This isn't actually the case and this term we are bringing to the Glastonbury listening public a very special treat. 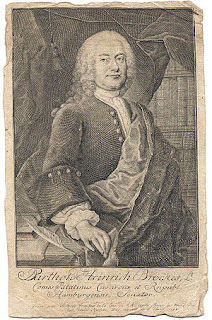 This is the Passion written by Handel in about 1716. He used a text written by Barthold Heinrich Brockes in 1712. Others also set this text, including Telemann.
The format is substantially the same as that later adopted by Bach, with choruses, a story-telling evangelist, chorales, arias and crowd scenes played by the choir.
It is said that J S Bach was so impressed with the music that he copied it out in full and it is clear that many elements of Handel's work have crept into Bach's St John Passion.
We are looking forward to being able to bring this long-neglected work before audiences.
The concert will be at 7.30 pm on 9 April 2011 at St Mary's Church, Glastonbury. Tickets £10.00 from 01458 224486, the Glastonbury Music Shop or on the door.
See you there!
http://en.wikipedia.org/wiki/Brockes_Passion
Posted by Glastonbury Cantilena at 03:51 No comments:

When we chose 11th December 2010 as the date for our autumn concert at St Mary's, Glastonbury, we did have some concerns about the clash with the carol concert at Wells Cathedral and the Frost Fair concert at St John's Glastonbury. Glastonbury was heaving that evening with revellers from the fair; would St Mary's be heaving too?

We needn't have worried! For our first concert at St Mary's in eight years and also the first under the baton of Tony Bevan in about the same time, we had a nearly capacity audience.

The Orchestra put together for the occasion produced a truly musical interpretation and there was palpable excitement in the church.

We were pretty strict about sticking to the Advent theme with readings from Rowan Williams,  Isiah & "Cider with Rosie". The audience joined in with Advent carols with considerable enthusiasm. And Bach's beautiful "Wachet Auf" brought the evening to a most satisfying close.

We'd offered to showcase St Margaret's Hospice , and their representative, Sue Medlicott explained to the audience the importance of the work the Hospice does, believing that every human life has a value and should be lived to the full, even it its last moments. Contributions from audience members topped £250.00.

And let's not forget the mince pies from Burns the Bread! Delicious smells of mulled wine lured audience members into the adjacent church hall and they attacked the heaped plates of mince pies, washing them down with the wine.

It's so rewarding to be able to combine the pleasure of singing beautiful music with supporting a very good cause. In fact, I think that people who chose St John's or Wells Cathedral over us were missing out!
Posted by Glastonbury Cantilena at 07:57 No comments:

We are so glad that in other parts of the country the weather couldn't deter contributors to Heart Research UK's "Sing for your Heart" event. Unfortunately for Cantilena, yet another heavy fall of snow put a stop to our event which was planned for the 21st December 2010 at the Rural Life Museum.

Many members of the choir live in rural locations and being cut off is not unusual for them. "regrettable, but understandable" was how one choir member put it.

Never mind, hopefully in 2011 we will be able to combine our desire to sing carols where they should be sung - in the streets and taverns - with raising money for a good cause!

Watch this space!
Posted by Glastonbury Cantilena at 06:59 No comments: