Choir’s got rhythm and at a bargain price

Cantilena’s Summer Concert last Saturday was an eagerly awaited affair. I am more familiar with their bigger Spring concerts and found that the relaxed atmosphere of this event was perfect for a hot Summer evening.

The venue, St Michael’s Church, Shepton Mallet, was a most suitable choice as it had all the amenities and a large hall and garden for the after-show buffet. 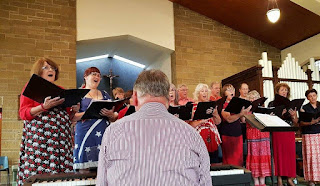 The concert was American themed with plenty of traditional spirituals and songs from the slave era. I recognised many – “Shenandoah”, “Swing Low” and, my favourite, “Little David Play on yo’ Harp”. But the triumph of the evening was surely “Steal Away”,  arranged by Michael Tippet for his oratorio “A Child of our Time”.

Another good choice was the spiritual “Were you There?” – a sad song about the crucifixion, opened by two strong altos.

Cantilena was supported by Simply Uke, a local Ukulele band giving their first concert in front of a paying audience. They played well and the audience was most appreciative.

I very much enjoyed the evening which, at £10, including programme and delicious buffet prepared by choir members, was a bargain. I would have expected to pay £15.00 for a concert of this calibre.

Beatrice Dixon 9 July 2017
Posted by Glastonbury Cantilena at 03:05 No comments: