With my Little Ukulele in my Hand

You learn something every day, they say, and I certainly did today.

At the Summer concert, Cantilena is being joined by Simply Uke, a local seven-piece ukulele band which will add to the American flavour of this concert. Click on the link to find out more.

I decided to find out exactly what a ukulele was and discovered that it was invented in Hawaii, adapted from a Portuguese stringed instrument called a machete, introduced in the 19th century by immigrants from the Azores and Madeira. From there it spread into the rest of the United States, becoming an important part of country music and jazz.

Simply Uke plays a wide range of music, including Classical, swing jazz, pop and blues. They will bring variety to the concert and I'm looking forward to hearing them. 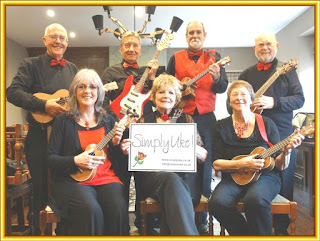 The Hawaiian translation of ukulele is "jumping flea" - which I hope won't form a central part in the concert!

Posted by Glastonbury Cantilena at 00:16 No comments:

Exploring the Beat of American Music

One thing that often distinguishes American music from that of the Old World is its rhythmic freedom.

With influences from Ireland, Eastern European Jews and Africa, this is hardly surprising. And there was no musical establishment to hold musicians back. Influences combined; the African American Spiritual uses traditional Christian harmonies, which the slaves were taught by missionaries, and added their own speech patterns to give a unique flavour to their songs.

In the northern states we see music that is much more based on old folk melodies. We are singing the charming Appalachian lullaby "Black Sheep". Listen to it by clicking on the link.

We are also adding music from Hawaii to the mix which makes this a "must do" event. All the details are below. 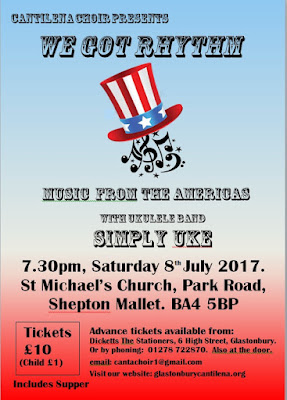 Visit our  website to learn more about the concert and the choir.....
Posted by Glastonbury Cantilena at 03:47 No comments: